The topic is well discussed and i really like it . Thank for sharing. 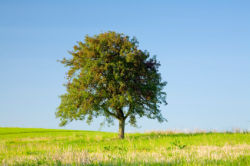 At a small college a group of incoming freshmen marketing majors gathered for their first class. As the wise, old Professor of Search Engine Marketing made his way to the front of the room, one of the students asked him, “Professor, what is SEO?”

The professor looked over the classroom full of young students and replied, “Let me tell you a story…”

There once were 5 families that lived in a rural valley where the soil was rich, the weather was harsh, and the best apples in the whole world grew wild.

One day at the first home the man of the house said, “My family is hungry. I know there’s an apple tree on the ridge. I’ll go and see if I can get some apples for my family.”

He did this day after day, but one apple was not nearly enough to feed his family so they grew hungrier and weaker each day.

At the second home the woman of the house said, “My family is hungry. I know there is an apple tree by the river that looks healthy. I’ll go and see if I can get some apples for my family.”

So, the woman took a basket and a picking stick and walked to the apple tree by the river. She pulled out her picking stick to pluck apples from the tree, but while the tree had seemed healthy from a distance there were only a few apples on it. (In some versions of the story the tree is full of apples but they are all very high in the tree.) She jumped and reached as high as she could with her stick, but she only got 2 apples, which she took home to her family.

She did this day after day, but 2 apples were not nearly enough to feed her family so they grew hungrier and weaker each day.

At the third house, the man thought, “I know of many apple trees in the valley I will visit each one and see which one has the most apples I can reach with my picking stick.” So, he did. And while he saw some trees that were bigger, and other trees that had more apples, he settled on a small tree that had a good number of tasty apples, which he brought home to his family. They had enough to eat each day but no more.

At the fourth house, the woman thought, “I know of many apple trees in the valley. I too will visit each tree and taste an apple from each to see which one has the most edible apples I can reach with my stick.” So, she did. And while she saw some trees that were bigger, and other trees that had more apples, she too settled on a small tree that had a good number of tasty apples, which she brought home to her family. They had enough to eat that day. 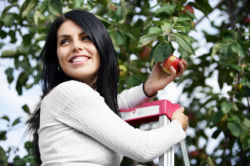 After dinner she thought, “If I only had something to stand on, I could pick more apples in a taller tree.” So, she went to her workshop and made a small step ladder. The next day with the help of her ladder and her picking stick she was able to pick more apples from a slightly bigger tree. Her family had some extra apples they canned for the future.

Each night the woman would go into her workshop and add a little more to her ladder, and each day she was able to pick more and more good apples. After many months she was picking the best apples from one of the biggest tree in the valley and selling the extra apples to the other families in the valley.

At the fifth house the man did all of the things the woman of the fourth house did, but he also picked from many different trees and wrote down in his notebook how many apples he got from each tree each day. If he noticed a tree was bearing less fruit he might stop picking from it. If he noticed another tree had more good fruit at the top he would add to that tree’s ladder. After many months of this he was bringing home more apples than all the families in the valley could eat, so he started shipping extra boxes of apples to markets all around the world.

When he finished the story one of the students asked, “Professor, what does it mean?”

The professor replied, “The apple pickers represent website owners, the apple trees are keywords, and the apples – website visitors.”

The first apple picker who set his basket under the tree and took a nap is like the person who builds a website, doesn’t optimize it for search engines, and hopes people will just drop in.

The second apple picker who chose to pick apples from the tree that looked healthy only to find it had few apples is like the person who builds a website and optimizes the web pages for phrases she thinks will bring visitors. But she neglects to do any keywords research and ends up optimizing her site for phrases that aren’t searched much (or phrases which are out of reach for her site to compete for). 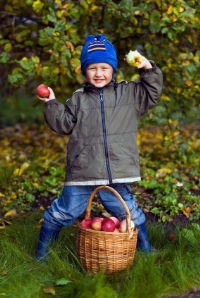 The third apple picker who looked at all the trees in the valley and chose the one with the most fruit he could reach is like the website owner who builds a site, does keyword research, and optimizes the site for good, relevant keywords that his site is able to compete for. They are not the most popular phrases in his field but with on-page optimization he is able to get his site into the top 10 search results and generate sales or leads.

The fourth apple picker who looked at all the trees, chose the one with the most fruit she could reach, and built a ladder in her workshop after dinner so she could get the apples from bigger tress is like the site owner who builds a site, does good keyword research, optimizes her site, and begins building links to her site. She not only receives good results early on, but her number of visitors and sales grow as the number of links to her site grows and she is able to compete for more competitive keywords (bigger trees).

Lastly, the fifth apple picker who looked at all the trees, built a ladder, and tallied the number of apples from each tree each day is like the website owner who does keyword research, on-page optimization of his site, link building, and tracks his search rankings with ranking reports and his website traffic with analytics. He is able to build a successful website that competes for the best search phrases and can adjust as his industry and search marketing trends change.”

From that day forward every student brought an apple for the wise, old professor each day they attended class.

And that’s where we get the tradition of an apple for the teacher. Don’t believe me? Google it.