Interesting little interview. I wouldn't mind reading some more from him. Any idea where I could find some articles written… 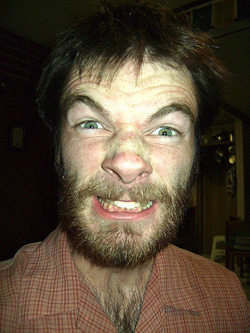 “These people are a bunch of hypocrites.”

“The people are a bunch of stuck-up snobs.”

When talking about listings and reviews for churches the comment always comes out, “We don’t feel comfortable with just anyone being able to post a review.  They might post something negative.”  The fear is that someone who had a bad experience at the church will post some rant about the church on one of these review sites or perhaps someone who doesn’t have any connection to the church at all, but just doesn’t like Christians will post some false story.  It’s an understandable fear, but I think it’s one that we must get over.

This Doesn’t Happen Very Often
Most church staff I speak with are afraid this will happen, but it really doesn’t happen very often.  I’m not saying it never happens, but it’s certainly not a given that it will happen.

If It’s Going To Happen, It’s Going To Happen
Just because you aren’t engaging people in listings and reviews doesn’t mean your church doesn’t have listings and people can’t post reviews.  In fact, even if your church has no listings at all, there are several sites where someone can simply create a listing by posting a review.  So, not setting up listings and spreading the word about those listings doesn’t stop negative comments from popping up, it just takes you out of the conversation.  If it’s going to happen anyway, you might as well be a part of the conversation.  Which leads me to the next point…

You Can Turn Negative Into Positive
The church I attend had an interesting situation from a negative comment on a blog.  Yes, it’s a blog and not a review site, but the principle here is the same.  A while back we setup a blog on the church site.  I posted a test post just to make sure everything was working correctly and showed it to the person who was thinking of blogging.  I then neglected to remove the text post (yeah, I know) and the person who was going to blog had some things come up that prevented them from starting to blog.

So, now we have the blog post on the site which everyone on staff (and myself) simply forgot about…but the comments feature was active. 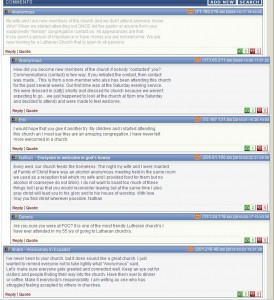 Later, someone who apparently visited the church and had a bad experience found the blog and posted their negative comment on the blog.  Click on the image to the right to see it full size and see what happened.

In the end, a person who had never visited the church has a positive view of the church because of the way the church members handled the situation.

Unfortunately, in this situation the person did not identify themselves.  So, we were unable to contact them about their experience.  But, I’ve also seen situations at churches where a former member of the church made a negative comment (and identified themselves in the comment) about why they left the church.  Members of the church, including the pastor, were able to get in touch with the person and speak with them.  In the end they resolved the situation and the people returned to the church.  That wouldn’t have happened, if no one had ever heard about the negative comment.

You May Learn Something
If you do start getting negative reviews that are legitimate, there may be something your church needs to work on.  No church is perfect.  By listening to people through these reviews and other social venues, you may learn about some weaknesses at your church and then be able to address them.

People Today Want Authenticity
People don’t trust brochures or the “official corporate message”. People know that no church is perfect. Churches that deal with those issues in an open way, even where it can be seen online, demonstrate authenticity and show visitors that issues within the church are not ignored, but dealt with in a positive way (assuming you are dealing with issues in a positive way).  Please note, I’m not suggesting that churches deal with personal issues in public online, we should certainly still follow Matthew 18 for those issues.

2 Timothy
“For the Spirit God gave us does not make us timid, but gives us power, love and self-discipline.” We should not act out of fear, but boldly engage with people about the Gospel for sake of Jesus Christ.  Hopefully, your fears have been dispelled at this point.  But, if some still remain, ask yourself whether that fear should stop you from reaching out online.

Has your church ever received negative reviews?

Do you have any stories of a tough situation that arose from negative posts?  How did you handle it?