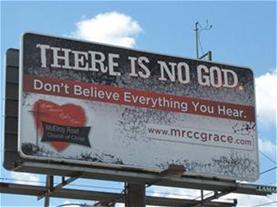 There’s an interesting thing happening in Mansfield, OH.  A church put up several billboards, but people thought the billboards were actually put up by an antheist group.  Why?  Because the church got a little too creative with their marketing and lost the message.

Here’s what happened:
McElroy Road Church of Christ in Mansfield, Ohio wanted to create a marketing campaign that would cause people to stop and think.  So, they put up several billboards with thought provoking messages.  The sign causing the most controversy (seen above) has “THERE IS NO GOD.” in huge letters at the top of the billboard.  Obviously, this is what draws people’s attention.  In much smaller letters below that the sign reads, “Don’t believe everything you read.” and then there is the church’s web address and logo.

The Good Part:
There are two big positives to the billboard:

The Not So Good Part:
One of the problems with the message is that it’s not clear what they are trying to say.  You can read the sign as saying:

You shouldn’t believe it if you hear there is no God.  Instead, you should come to our church and hear the truth.  (I suspect this is what the church intended people to think)

But you can also read the sign as saying:

There is no God and you shouldn’t believe what you are hearing at McElroy Road Church of Christ.

If you think about it long enough, the first interpretation makes more sense.  After all, why would an atheist group include the church’s web address rather than their own web address.  But we’re talking about a billboard here.  Most people will have about 3 seconds at most to take in the message and their sharing their focus with driving and whatever else is going on the car (radio, discussion, kids, etc.).  Can you really expect people to evaluate the meaning of an unclear message or even catch all the parts of the billboard during that time?

Was It Effective?
According to the  Mid Ohio Atheists (MOA) organization, they’ve received messages congratulating them on the sign and they thanked the church for advertising their views for them.  The church has also received several angry emails from Christians about the signs, though the Pastor (Frank Moore) said that once the sign was explained, those people were supportive.

That doesn’t sound too good, but then again the church is getting some media attention, including blogs (like ChristianPost where I learned about this and, of course, our blog).  So, I guess it depends on whether you believe that any publicity is good publicity.  I think getting publicity for being controversial can be good if it defines you in a good way.  A church that takes a very public stand against abortion with positive message about life may be controversial, but it defines the church in a way the church wants to be known.  On the other hand, being controversial because people misunderstood the message you were trying to get out is probably not the kind of publicity that is helpful.

Creating Effective Marketing Messages:
When marketing, it’s important that your message is able to be clearly understood.  Here are a few ideas to help ensure your church’s marketing message is effective.

In the end, I think McElroy Road Church of Christ’s intentions were good, but their execution wasn’t so great.  They let their creativity muddle their message.  Getting attention is good.  Enticing people to respond to your message is great.  Confusing people with your message is not good.

Despite the confusion, do you think the billboard ad will work?

Do you have any examples of effective or ineffective church marketing messages?